Stewart was on NPR’s Marginalia — check it out! 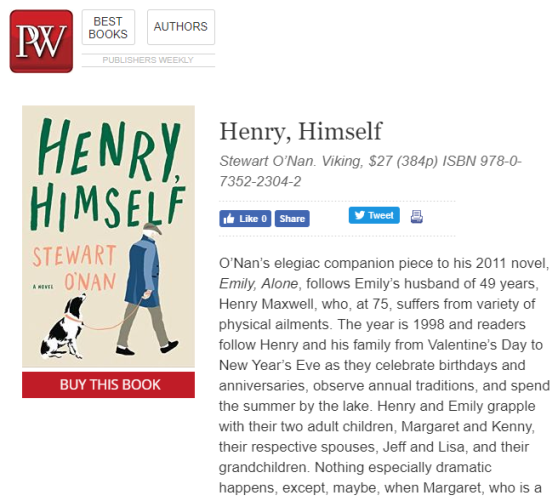 Full text of the review:

O’Nan’s elegiac companion piece to his 2011 novel, Emily, Alone, follows Emily’s husband of 49 years, Henry Maxwell, who, at 75, suffers from variety of physical ailments. The year is 1998 and readers follow Henry and his family from Valentine’s Day to New Year’s Eve as they celebrate birthdays and anniversaries, observe annual traditions, and spend the summer by the lake. Henry and Emily grapple with their two adult children, Margaret and Kenny, their respective spouses, Jeff and Lisa, and their grandchildren. Nothing especially dramatic happens, except, maybe, when Margaret, who is a recovering alcoholic, gets into an accident right before Thanksgiving and Emily rushes to be with her, leaving Henry to serve the holiday feast to the rest of his family on his own. A member of the “Greatest Generation,” Henry deals with his own growing sense of mortality, but he does it with a rare grace that endears him to the reader. The author evokes Henry’s middle-class Pittsburgh existence like a Keystone State Joyce. One would have to go back to Evan S. Connell’s Mrs. Bridgeand Mr. Bridge to find a literary marriage bookended in such a perceptive fashion. (Apr.)

“Henry Himself” is a character-driven novel, the quiet story of a man from the greatest generation who finally learns at 75 to stop worrying about his past and any mistakes he may have made and to start living for for the moment. I enjoyed this simple novel, felt like I was reading about my dad.

“Henry, Himself” is a beautiful book with a touch of the ineffable about it, and the best novel I have read so far this year.

I love most all of Stewart O'Nan's novels. About to read HENRY, HIMSELF. Read: EMILY, ALONE; THE ODDS, & LAST NIGHT AT THE LOBSTER!!!!

It’s May, after all, and in this part of the world the trees have started budding and the birds that aren’t extinct have started singing. What better time to read Ali Smith’s novel “Spring,” which balances its political anxieties with emotional complexity and a warmth appropriate to the season? Continuing with fiction, you might pick up Stewart O’Nan’s character study “Henry, Himself,” or settle in with Julie Orringer’s historical novel “The Flight Portfolio,” about Varian Fry’s exploits saving dissidents from the Nazis. Jennifer duBois is back, with a novel about a talk-show host who goes too far, and Laila Lalami sets her latest novel in the towns of the Mojave Desert, where a hit-and-run death ties together the stories of nine very different characters.

HENRY, HIMSELF, by Stewart O’Nan. (Viking, $27.) A novel that uses short vignettes to capture a year in the life of the Pittsburgh man whose shadow loomed over two of O’Nan’s earlier novels. Most of us know people like Henry from the outside; the gift of O’Nan’s fiction is to immerse us deeply in his essence. “This is a novel that charms not through the complexities of its plot but through its subtle revelations of character and the human condition,” Dominic Smith writes in his review.